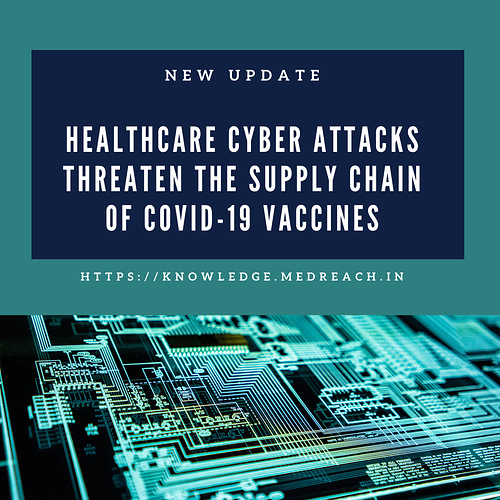 As the world continues to combat the COVID-19 pandemic, cybercrime against healthcare targets has been a steady and growing concern. Cybercriminals have not let anything slow them down, whether they run phishing scams against healthcare staff, instal malware in labs, or steal data from hospitals, and the speed of cyber attacks on healthcare is not slowing down now.

Healthcare cyberattacks have been a major problem that has affected every corner of the medical sector since the pandemic lockdowns began in March 2020. Ransomware attacks were common against hospitals and other care facilities in those early months.

Cybercriminals set their eyes on new goals as the pandemic continued: drug firms trying to create a vaccine. Just before the first vaccinations were released, this behaviour was particularly rampant, as national-state hackers and other bad actors targeted major pharmaceutical developers like Takeda and Pfizer. Cybercriminals have scrambled from teaching hospitals like UCLA to get their hands on useful research and treatment data,

Threat actors used fake work listings sent via social media and job search apps such as LinkedIn and WhatsApp in one phishing scam perpetrated by alleged nation-state hackers against employees at AstraZeneca to recruit employees to provide personal details that could be used to power spear phishing or download attachments full of malware.

Cybercriminals threaten the necessities required to bring the vaccine out, such as cold storage and distribution facilities, wreaking havoc on the supply chain of the medical sector. IBM researchers revealed that as vaccine delivery began, they had discovered widespread phishing operations targeting employees of trucking, rail, and cold storage firms. Read more from source