How Increasing Threat of Data Breach is Aiding in Blockchain in Healthcare Market Growth?

As technology and internet services are becoming accessible to virtually all individuals across the globe, so is our data that is floating out there in the interconnected web to be accessed by numerous hackers and cyber attackers. With everything becoming online these days, from financial transactions to personal information, on different databases, the incidence of data breaches and thefts has risen tremendously. This has impelled governments to take stringent measures to curtail such breaches of security and data. For instance, the European Union came up with a new data protection rule in May 2018, the “General Data Protection Regulation (GDPR)”, which aims to protect European citizens from data and privacy breaches. The advantages offered by the blockchain technology, such as security and trust and data integrity, have stimulated many companies, including those in the healthcare sector that store extensive information regarding patients’ healthcare and private data, to invest more in data security and protection.

The inclusion of the technology in safeguarding healthcare-related data and consolidation of all the information generated by different healthcare platforms has brought its potential in the limelight. Many public and private organizations are increasingly investing in blockchain technology for the healthcare sector. For instance, Health2047, an American Medical Association-funded company, invested $10.0 million in a blockchain health startup, named Akiri Inc., in January 2018. This was done to promote the development of a healthcare data platform based on this technology. Another initiative in this direction is the backing of the European Union to a project, MHMD, which visions to use blockchain for storing and transmitting medical data in a safer and efficient manner.

The blockchain in healthcare market has a significance presence in Asia-Pacific (APAC), North America, Middle East & Africa, Europe, and Latin America. In 2017, the largest demand for the technology was generated in the North American region, as many major pharmaceutical companies and healthcare organizations, such as Pfizer Inc., which are increasingly experimenting with the technology, are located here. Similarly, the Centers for Disease Control and Prevention struck a deal with Gem Health, a California-based blockchain solution provider, to create a real-time data sharing solution based on the blockchain technology, in September 2017. 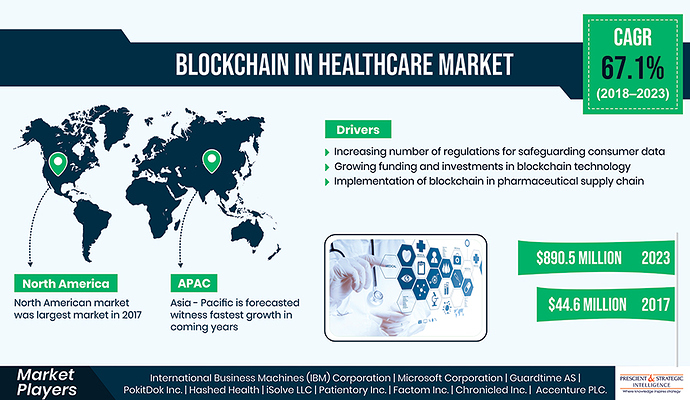 The need for better management of medical data is creating great opportunities for the players in the blockchain in healthcare market. The life sciences and healthcare industries generate and work on huge amounts of data, due to which they are facing problems on several fronts including fragmentation, inconsistency, cybersecurity, and interoperability. The blockchain technology has shown great potential in establishing a healthcare ecosystem that can manage the privacy, security, and interoperability of health data in a better way. In addition, it also assists healthcare providers in delivering better care.

Hence, the rising number of regulations for safeguarding consumer data and increasing investments and funding in the blockchain technology are driving the growth of the market.