How is Moderna's vaccine different from Pfizer's? 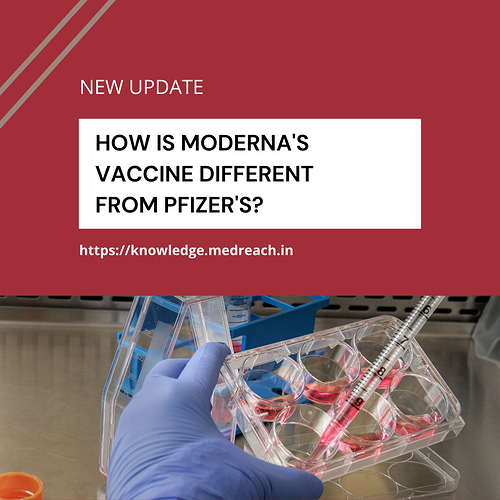 The two vaccines are very similar, but they have a few main differences that, as US Health and Human Services Secretary Alex Azar said last month, make Moderna’s vaccine “more flexible,”

Moderna — short for modified RNA — is a research corporation based in Cambridge, Massachusetts, while Pfizer is a pharmaceutical behemoth. Established in 2010, Moderna has never put a product on the market or approved any of its nine or so vaccine candidates for use by the FDA.

Efficacy: Moderna’s and the Pfizer-BioNTech vaccine both reported similar efficacy rates of almost 95%.
“They appear to be roughly equivalent,” said Dr. Paul Offit, a member of the FDA’s advisory committee on vaccinations, during a Tuesday appearance on CNN’s “New Day”

Structure: Although with slightly different structures and makeup, both vaccines rely on mRNA, or messenger RNA, to function.

Cold storage: Most notably, Moderna’s vaccine does not need to be stored at super-cold temperatures, such as Pfizer’s.
It is necessary to store the Pfizer vaccine at approximately minus-75 degrees Celsius, about 50 degrees colder than any vaccine currently used in the US. It is only safe to place the vaccine in the refrigerator for up to five days before it expires.

In comparison, according to Moncef Slaoui, the head of the US effort to create a vaccine for Covid-19, Moderna’s vaccine can be kept at about minus-20 degrees Celsius, or around the temperature of a home freezer. It is also possible to keep Moderna’s vaccine in a refrigerator for 30 days before it expires.

Dosage and timing: Moderna vaccine is administered as two doses of 100 micrograms given 28 days apart. Pfizer vaccine is given as two 30-microgram doses within 21 days.
Age: If approved, Moderna vaccine will be used in people 18 years of age and older, while Pfizer vaccine was authorised for people 16 years of age and older. Read More from the source