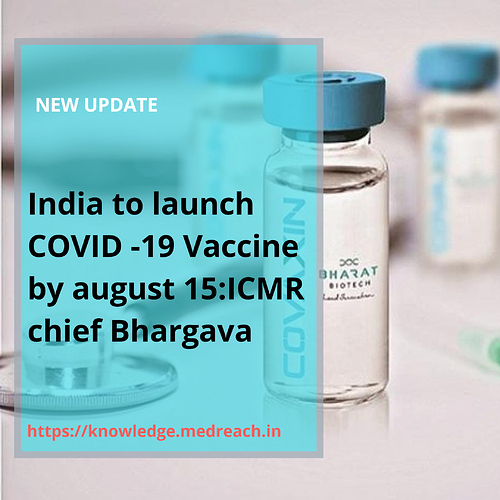 According to the head of the Indian Council for Medical Research (ICMR), the country’s premier state-run medical research organization, India plans to launch the Covid-19 vaccine by 15 August this year.

ICMR Director-General Balram Bhargava wrote to research groups on Thursday saying, "It is intended to launch the public health vaccine by 15 August 2020 at the latest after all clinical trials have been completed."

A senior doctor, who is a public institute researcher listed as a venue for the clinical trials, said: "If the date is August 15, 2021, it is workable. AstraZeneca has begun human trials in phase III, while this month the Moderna vaccine is expected to begin final stage trials.

If we can get a vaccine so quickly, other vaccine projects would probably not be required, "a vaccine maker said.
Bhargava 's letter said that the ICMR and Bharat Biotech were working together on both the preclinical and clinical production of this vaccine.

Earlier this week the company said it had completed pre-clinical trials (or animal trials) for its vaccine candidate Covaxin, and would start human trials in July.‘Get everything done by 07 July (in a letter dated 02 July) and start clinical trial participant recruitment’.

Even then, experts say that phase 1 human trials, which test primarily the toxicity of a vaccine candidate on a small population, usually take a month, and phase 2 trials, which look at efficacy and determine the dosage, may take six months.