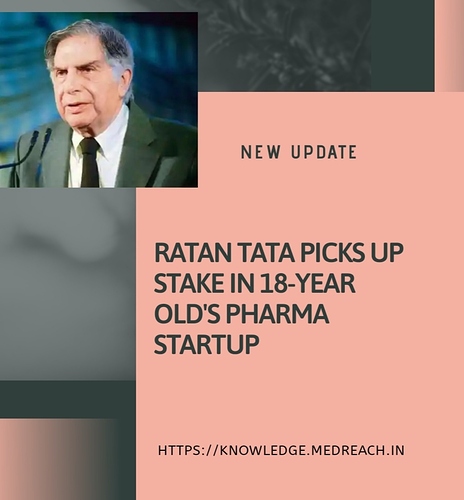 Ratan Tata, chairman emeritus at Tata Sons, on Thursday invested an undisclosed amount in a pharmaceutical start-up Generic Aadhaar, in his personal capacity.

The startup is run by the founder and CEO Arjun Deshpande, who is 18. The teenager from Mumbai began his venture two years ago with the goal of taking affordable medicines to the masses.

"When Sir Ratan Tata became aware of the business plan, he was inspired and agreed to be a part of this project in a personal capacity and help Generic Aadhaar touch every Indian," said Deshpande.

The start-up sources generic drugs directly from the supplier and markets them to retail pharmacies, reducing the wholesaler margin of 16-20 per cent.

Deshpande aims to partner with 1,000 pharmacies on a franchisee-based model in the coming months and extend its scope into cities such as Gujarat, Tamil Nadu, Andhra Pradesh and New Delhi. Generic Aadhaar will give the unorganized sector all the support by taking the right technology, IT infrastructure and branding to the fore. The business employs about 55 staff, including pharmacists, IT engineers and marketing professionals.

The company expects to have an annual revenue of twenty-six crore and looks at a turnover of twenty-five million crore for the next three years.

"Our unique business model gives us an advantage over any other players on the market at the moment as we plan to provide affordable healthcare to millions of households. Our goal is to provide the treatment that senior citizens and pensioners deserve with our concept of providing cheap medicines that are needed on a daily basis," Deshpande said.

Generic Aadhaar already supplies diabetes and hypertension medicines but will soon start selling cancer drugs at prices below the retail level. The start-up also has a tie-up with four manufacturers accredited WHO-GMP in Palghar, Ahmedabad, Pondicherry and Nagpur.
Read More