The Pitfalls of Telehealth — and How to Avoid Them 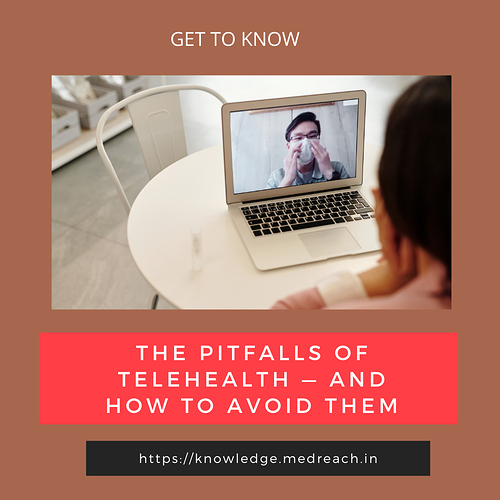 Telehealth is a boon, but its downsides are becoming apparent as use has intensified with the Covid-19 pandemic. It may worsen inequalities in access and increase the workloads of clinicians, unless providers are cautious. The authors propose four approaches to avoid the unintended effects of telehealth from damaging its advantages, taking a lesson from the implementation of electronic health records.

Protect the clinician-patient relationship
In the examining room, EHRs placed a computer and keyboard between clinicians and patients, disrupting a sacred relationship. Telemedicine could also damage this partnership, and this new screen could expand existing access gaps. A recent study from a large New York City health system for example, showed that patients over 65 years of age have the lowest chances of using telehealth, and that Black and Hispanic patients had lower chances of using telehealth than their White or Asian counterparts.

While at first there was opposition to allowing patients access to their medical records, providers realised in time that the experiences of patients with the EHR could motivate and strengthen treatment. Despite some implementation problems, patient portals have made it possible for millions of patients to access their medical records, read reports from doctors, deliver messages, and provide useful information and corrections. There are many more immediate opportunities to engage patients through telemedicine, and we can move more quickly than we did with EHRs to use this technology to include patients in their own treatment.

The EHR digitised notes and laboratories, made knowledge searchable and shareable more quickly, and created a healthcare data revolution. But the days and evenings of health care workers have also been steadily occupied, with some doctors spending more than half of their working days on the EHR. If not carefully managed, the proliferation of telehealth could similarly reshape the workdays of clinicians, for example by adding virtual visits on top of a full slate of existing clinical responsibilities, or allowing duplicate information or work requests to flow in from multiple channels if systems are not interoperable.

As EHR adoption increased, interoperability between diverse electronic systems quickly became a problem. EHRs that do not readily share data have resulted in duplication of tests, hindered communication with providers, and increased the time spent on external records by both patients and providers. As health systems create their own technologies around the country to compete in an increasingly digital environment, they need to avoid creating a glut of incompatible digital resources that leave clinicians and patients to juggle and lock up a rich new source of virtual-patient data within a single application or framework. Read More From Source